How to predict the weather 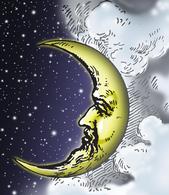 "The old Man in the Moon at last has tilted the silver crescent so parched Earth can get some rain, weather prognosticators agreed Saturday. One of the oldest weather signs of the Ozarks, recalled Attorney Arch A. Johnson, is that a straight-up-and-down moon, such as the new moon of Friday night, is agreeable to rain. The old timers used to say that when you could hang a powder horn on the point of the new moon, in other words, when the points turned upwards, then dry weather was in store. Another way of saying it is that when the 'horns' of the moon point downward, the water will spill out of it.

"W.A. Willoughby, [a] farmer west of Springfield, who was at the courthouse Saturday, pointed to the southeast and predicted that wind from that direction would bring rain.

"'When the wind is from the west, as it has been for several days,' he said, 'then there is no hope for rain. But when it shifts around to the southeast, then that’s the best indication of rain I know.' Others pointed out that the 'rain crows' are hollering out in the country. They are yelling, 'Choak! Choak! Choak!' in the approved manner to bring down a shower. Also the breeze under the maple trees is turning the gray underside so it is noticeable and that has been looked upon as a splendid sign of rain.

"J. Will Webb, probation officer, hasn’t had time to observe whether his favorite 'weather sign' is for or against rain. But there’s one thing sure, he says, if flint rocks are 'sweating' then rain is coming soon. After a drought flint rocks will look moist sometimes and that means rain, he declared. 'Sometimes the rainfall is small, but it will rain some.'

"Mr. Webb’s nephew, C.E. Webb, who lives about six miles southeast of Springfield, said that another good weather sign is that it will rain within three days after a cave begins to drip overhead in dry weather. 'That’s true,' declared the probation officer. 'I remember that Uncle Joe McCraw used to prophesy rain that way. He had a cave on his place and sometimes he would come by our house saying, “Well, it’s going to rain in three days. The cave is sweating this morning.” He seldom missed it.'

"Incidentally, C.E. Webb lives near the McCraw cave, and he said that the water in the cave spring is at the lowest point old timers can recall. This is true also, he said, of other springs in his section."
News Leader July 15, 1934

More modern weather prediction advice can be found in The weather detective: rediscovering nature's secret signs by Peter Wohlleben, Great Courses Meteorology: An introduction to the wonders of the weather by Robert G. Fovell, and The Best of the Old farmer's almanac: the first 200 years by Judson Hale.