Maggie O’Farrell’s novel, "Hamnet," is a poignant story about family, marriage, and grief. This masterpiece of historical fiction tells the tragic story of the family of the world’s most famous writer who, while almost entirely absent and never named, haunts every page. If you’re anything like us, Hamnet will surely leave you hungry for more. So, check out the rest of the reading list where you’ll find read-alikes in historical fiction, context-expanding biographies, and an original work that are sure to pique your interest and keep you coming back for more. 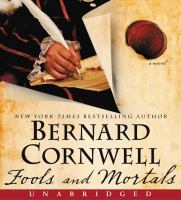 Fools and Mortals [Sound Recording] : [A Novel] by Bernard Cornwell
In the late sixteenth century as the English theater begins to flourish outside of London, a growing number of playhouses, playwrights, and actors vie for glory and success. In this bawdy, brutally competitive world, young actor Richard Shakespeare struggles to make his mark in a theater company dominated by his estranged older brother, William. Their rivalry is the centerpiece of this high-stakes story of conflict and betrayal. Read by Thomas Judd.

Hamnet : A Novel of the Plague by Maggie O'Farrell
A thrilling departure: a short, piercing, deeply moving novel about the death of Shakespeare's 11 year old son Hamnet--a name interchangeable with Hamlet in 15th century Britain--and the years leading up to the production of his great play. England, 1580. A young Latin tutor--penniless, bullied by a violent father--falls in love with an extraordinary, eccentric young woman--a wild creature who walks her family's estate with a falcon on her shoulder and is known throughout the countryside for her unusual gifts as a healer. Agnes understands plants and potions better than she does people, but once she settles with her husband on Henley Street in Stratford she becomes a fiercely protective mother and a steadfast, centrifugal force in the life of her young husband, whose gifts as a writer are just beginning to awaken when his beloved young son succumbs to bubonic plague. A luminous portrait of a marriage, a shattering evocation of a family ravaged by grief and loss, and a hypnotic recreation of the story that inspired one of the greatest masterpieces of all time, Hamnet is mesmerizing, seductive, impossible to put down--a magnificent departure from one of our most gifted novelists--|cProvided by publisher.

March : A Novel by Geraldine Brooks
In a story inspired by the father character in Little Women and drawn from the journals and letters of Louisa May Alcott's father, a man leaves behind his family to serve in the Civil War and finds his beliefs challenged by his experiences.

Shakespeare : The World as Stage by Bill Bryson
Bill Bryson's bestselling biography of William Shakespeare takes the reader on an enthralling tour through Elizabethan England and the eccentricities of Shakespearean scholarship--updated with a new introduction by the author to commemorate the 400th anniversary of Shakespeare's death William Shakespeare, the most celebrated poet in the English language, left behind nearly a million words of text, but his biography has long been a thicket of wild supposition arranged around scant facts. With a steady hand and his trademark wit, Bill Bryson sorts through this colorful muddle to reveal the man himself. His Shakespeare is like no one else's--the beneficiary of Bryson's genial nature, his engaging skepticism, and a gift for storytelling unrivaled in our time.

The Tragical History of Hamlet Prince of Denmark by William Shakespeare

Will in the World [How Shakespeare Became Shakespeare] by Stephen Greenblatt
A young man from a small provincial town moves to London in the late 1580s and, in a remarkably short time, becomes the greatest playwright not of his age alone but of all time. How is an achievement of this magnitude to be explained? Stephen Greenblatt brings us down to earth to see, hear, and feel how an acutely sensitive and talented boy, surrounded by the rich tapestry of Elizabethan life, could have become the world's greatest playwright.

Wolf Hall by Hilary Mantel
Henry VIII wants to annul his marriage of twenty years and marry Anne Boleyn. The pope and most of Europe opposes him. Into this impasse steps Thomas Cromwell, a wholly original man, a charmer and a bully, astute in reading people. He is also a consummate politician. But Henry is volatile: one day tender, one day murderous. Cromwell helps him break the opposition, but what will be the price of his triumph?