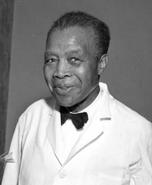 I Remember Christmas by Job Thompson

“I have seen many Christmases, 88 of them. The first ones were spent at Macedonia, a small rural settlement three miles east of Springfield, where I and my eight brothers and sisters were born.

“Christmas then was simple, a few home-made toys, or a bright new knife or ball. Christmas dinner was cooked on an open fire place, and the Christmas story was read to us by my mother, whose reading was painfully slow, but reverent. My father was unable to read, but he listened as attentively as the children.

“As the years passed, and my three boys came to me, Christmas brought another meaning and joy, that of providing for and seeing my children’s hearts made happy by my own efforts.

“Later, after two of my boys died, one as a soldier in World War I, and when my remaining boy, John, had grown up and gone, I found joy in working with and giving happiness to the children of our churches. I have always loved and worked in Sunday School. During recent years, I have found pleasure in helping to see that the children of whatever church I attended were provided for at Christmas time.

“For the past 20 years, Mr. Ralph Foster has given me $20 to give to the children at Christmas. This money is changed into nickels and placed in small jars. The children take and keep as many nickels as their little hands can withdraw from the jars. They 'grab' as long as the nickels last. Their efforts and cunningness are a joy to see. The larger children share, by being given a small amount outright.

“There are many other fine friends who have contributed to my efforts to help my people build and keep their churches. I have worked in other churches here besides my beloved Gibson Chapel Presbyterian Church. Many have asked, why help other churches? I reply, I want to help wherever help is needed.

“Christmas at the Colonial Hotel is increasingly pleasant. Our many fine friends come to celebrate with special parties which I am privileged to serve. Mr. and Mrs. Landers, who constantly watch over me with affection and care, and their lovely children, whose happy voices and laughter brighten the halls, truly make my Christmas joyous.

“Above all, the watchful, loving care of Our Lord, whose birthday gave us Christmas, makes the memory of Christmas brightest, because through Him all hopes and joys have come."

Job Thompson died February 1968 at age 93. In Mr. Thompson's obituary, Mrs. Thompson said that Job’s son, John, had died the week before and this seemed to have a great effect on Job's health. Job’s children were Clarence, John and William. William died at 15 years of age in 1919. Clarence L. Thompson joined the Student Army Training Corps October 15, 1918  in Quindaro, Kansas and died of influenza November 7, 1918. John Landon Thompson served in WWII as a captain in the Signal Corps, attended WIlberforce University in Ohio, moved to California and joined the Golden State Mutual Life Insurance Company, and held many titles in the Masonic orders, he was a Legionnaire, a member of the Baptist Church, a licensed real estate broker, and a member of the executive board of the Los Angeles branch of the National Association for the Advancement of Colored People and an institutional representative for the Boy Scouts.

Job Thompson’s obituary also stated that he worked for the Colonial Hotel for 62 years. He tried retirement at age 75 but soon returned to full-time employment to serve as a caterer at special parties. Celebrated persons he served were many Missouri governors and President Harry S. Truman. He was particularly proud that the FBI investigated him thoroughly and designated him as the one to serve the President when he visited Springfield. He was survived by his wife, Florence, a retired mathematics teacher; two step-daughters, Mrs. Elsie Nicholas and Mrs. Lula Henderson; five grandchildren, two great-grandchildren and four great-great-grandchildren.

See also the Library's online collections Black Families of the Ozarks and the Lincoln School Collection.

The library's Local History Card Index has a statement from Hal Ingram in 1969 that there was an African American Macedonia Church at corner of Sunshine and Ingram Mill Road about 1900. This may have been the area Job Thompson refers to in the opening paragraph. The photograph is part of the News-Leader collection.