Popular Fiction of the 1920s

The bestsellers of today are rarely considered to be the greatest novels of all-time, but no one can tell if a book published in our lifetime will be read a hundred years later. Here is a list of bestselling novels from the 1920s. Many of these books did not receive critical acclaim, but were widely read and loved by the public. Although you probably won’t find most of these on a class syllabus, they were the ones most read and talked about by the average person in the 1920s, and they can still be enjoyed even a hundred years later.

All Quiet on the Western Front by Erich Maria Remarque
"All Quiet on the Western Front" became an international bestseller and helped form the conversation about the reality of WWI. It follows Paul Bäumer, who enlists in the German army during World War I with youthful enthusiasm. But the world of duty, culture and progress he had been taught breaks in pieces under the first bombardment in the trenches. Through years of vivid horror, Paul holds fast to a single vow: to fight against the principle of hate that meaninglessly pits young men of the same generation but different uniforms against one another.

Carry On, Jeeves by P. G. Wodehouse
Wodehouse's popular stories follow a rich young gentleman named Bertie Wooster who inevitably gets drawn into trouble and his valet, Jeeves, who creates complex plans to solve his employer's problems. From the first introduction of the characters to the last novel, Wodehouse published new stories following this comedic duo for 60 years. This short story collection will appeal to readers who love dry British humor and absurd comedic situations.

Main Street by Sinclair Lewis
This satirical novel was published in 1920 but takes place pre-WWI in a fictional small town in Minnesota based off of Lewis' hometown. "Main Street" follows the story of Carol Milford, a recent college graduate from St. Paul who leaves to marry a doctor in a small, middle-class town, only to find her efforts to bring culture and beauty to the town thwarted by its residents, testing her idealism.

Passing by Nella Larsen
Nella Larson only published two novels and a few short stories, but her impact on the Harlem Renaissance movement was vast. "Passing" follows a black woman passing for white, who is married to a white man who is unaware of her heritage. Her childhood friend also looks white, but remained in the black community and is married to a successful black doctor. When the two friends are reunited after many years, they are forced to confront their lies and secret fears. These themes continue to be explored in books today such as "The Vanishing Half" by Brit Bennett.

The Age of Innocence by Edith Wharton
In 1921 "The Age of Innocence" was listed by Publishers Weekly as one of the bestselling novels of the year and it won the Pulitzer Prize for Fiction. The novel looks at the highest circle of New York social life during the 1870s where Newland Archer, a young lawyer, prepares to marry May Welland. But before their engagement is announced, he meets the mysterious, nonconformist Countess Ellen Olenska. Ellen mirrors his own sense of disillusionment with society and provokes a moral struggle within him as he continues to go through the motions. A social commentary of surprising compassion and insight, The Age of Innocence toes the line between the comedy of manners and the tragedy of thwarted love while bridging the divide between public popularity and critical acclaim.

The Blue Castle by L. M. Montgomery
Best known for her Anne of Green Gables novels, Montgomery branched out into adult fiction with "The Blue Castle." Feeling trapped and controlled by her family, twenty-nine-year-old Valancy gets the courage to break expectations when she gets shocking news from the doctor. Valancy sets out to make a life she wants to live and finds friendship and love along the way. "The Blue Castle" is different from Mongomery's other works, but it features her iconic descriptions the Canadian countryside.

The Mysterious Affair at Styles : The First Hercule Poirot Mystery by Agatha Christie
No list of popular books in the 1920s would be complete without Agatha Christie who is known as the bestselling novelist of all time, her books are only outsold by the Bible and Shakespeare. "The Mysterious Affair at the Styles" is the mystery novel that introduced Detective Hercule Poirot to a world of readers in this locked room mystery.

The Mysterious Rider by Zane Grey
Although the Wild West as a historic era lasted only a few decades, the literary genre of westerns was established through nostalgia for a bygone time. Zane Grey's novels didn't receive critical acclaim, but they were popular with the public, and his stories were adapted into over a hundred films. "The Mysterious Rider" features a gunslinger with a secret past, a girl trapped in an arranged marriage, and the villainous son of the ranch owner. The mysterious rider, Hell Bent Wade, and his secrets play a role in each character's life and fate.

These Old Shades by Georgette Heyer
Heyer is best known for her historical romance novels, and her work is often suggested as a readalike for fans of Jane Austen. "These Old Shades" is a Georgian historical romance and is considered to be the book that launched Heyer's prolific career. Even though her name might not be as widely recognized today, many of her books are still in our library catalog. The Heyer fans of the 1920s would be the Bridgerton fans of today. 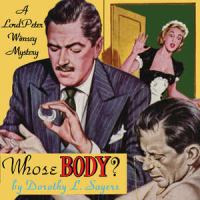 Whose Body? by Dorothy L. Sayers
Dorothy L. Sayers was writing during the Golden Age of Detective Fiction with Agatha Christie and G.K. Chesterton. Her detective Sir Peter Whimsy is introduced in "Whose Body?" when a corpse is discovered in the bathroom of a London architect's apartment. Wimsey must unravel the tangled threads that lead from a prostitute, to a well-known surgeon, and to a mysterious reunion at a London night-club.