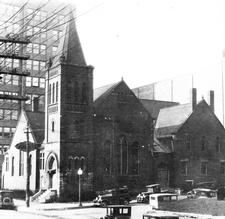 "The old gives way to the new. When the march of progress resulted in an increased valuation of its lot at Jefferson Avenue and Olive Street, boosting the price to $1,000 per front foot, members of the First Presbyterian Church decided to sell the property and to erect a handsome new edifice at Cherry & Dollison. So the lot was sold to the Lampe-Birkenback Tire Company for $83,000 and Monday March 18, workmen will begin the task of razing the historic old church building which has housed the congregation of the First Presbyterian Church for 37 years. Here is pictured the old church and the patented ramp building of four floors which will replace it and serve as future quarters for the Lampe-Birkenback Company. M.E. Gillioz will erect the building at a cost of $206,000. Equipment, lot, and building costs total more than $300,000. Plans were prepared by Heckenlively & Mark, local architects."

The Dollison Street referred to in the article is now called South John Q. Hammons Parkway. The image at top left accompanied the newspaper article and showcases the church and a drawing of the future Lampe-Birkenback building. The image at top right is from A Brief History of First and Calvary Presbyterian Church by Duane Meyer and V. Marie Arnold and is used with permission of First and Calvary Presbyterian Church.