Culture and History of Ukraine

The Gates of Europe: a History of Ukraine by Serhii Plokhy
From one of the foremost experts on Ukraine and the former USSR, a concise, authoritative history of Ukraine. Ukraine is currently embroiled in a tense battle with Russia to preserve its economic and political independence. But today's conflict is only the latest in a long history of battles over Ukraine's existence as a sovereign nation. As award-winning historian Serhii Plokhy argues in The Gates of Europe, we must examine Ukraine's past in order to understand its fraught present and likely future. Situated between Europe, Russia, and the Asian East, Ukraine was shaped by the empires that have used it as a strategic gateway between East and West--from the Romans and Ottomans to the Third Reich and the Soviet Union, all have engaged in global fights for supremacy on Ukrainian soil. Each invading army left a lasting mark on the landscape and on the population, making modern Ukraine an amalgam of competing cultures. Authoritative and vividly written, The Gates of Europe will be the definitive history of Ukraine for years to come. 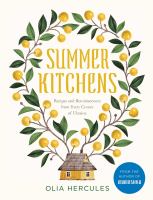 Summer Kitchens: recipes and reminiscences from every corner of Ukraine by Olia Hercules
In this new cookbook from award-winning author Olia Hercules, explore the diversity of Ukraine's cuisine and heritage through the alluring window of summer kitchens--small structures alongside the main house where people cook and preserve summer fruits and vegetables for the winter months. Featuring 100 superb recipes, a gorgeous collection of food and lifestyle images, and evocative personal narrative, Hercules illustrates how the region's cuisine varies as much as the landscapes, climate, and produce through her travels to the Carpathians, the Black Sea, the shores of the Danube and Dnieper, and her native land.

I'll Never Change My Name: an immigrant's American dream from Ukraine to the U.S.A. to Dancing with the Stars by Valentin Chmerkovskiy
Valentin Chmerkovskiy, the world championship-winning and beloved Dancing with the Stars ballroom dancer invites fans into his life as never before, sharing the experiences, including the failures and successes, that have shaped him, from his early childhood in Ukraine to growing up as an immigrant in the U.S. to his rise to international fame. For the first time, Val looks back at his childhood in Odessa, Ukraine, and his Jewish family's immigration to the United States--including what it was like to grow up as a stranger desperate to fit into a different culture, how he worked to become a premiere dancer, and, of course, the collaborations and competitions with his brother and fellow DWTS sensation, Maksim "Maks" Chmerkovskiy. Val speaks warmly of his close-knit family and shares intimate and inspiring stories meant to offer hope and motivation not only to fans but to everyone with a dream. Enduring anti-Semitism in their native land, Val's parents wanted a better life for their children--a desire that led them to leave everything they knew and start again thousands of miles away in a foreign country. It was a gamble that paid off--after years of practice and discipline, Val, along with his older brother Maks, have reached the pinnacle of success. Though he admits he sometimes still feels like an outsider, Val expresses his enduring gratitude for everything that America represents and pays homage to his adopted nation and the opportunities it has afforded him and his family. 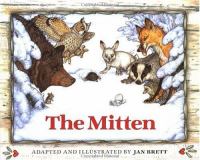 The Mitten: a Ukrainian folktale by Jan Brett
Several animals sleep snugly in Nicki's lost mitten until the bear sneezes.

The Fault Line: traveling the other Europe, from Finland to Ukraine by Paolo Rumiz
Paolo Rumiz traces the path that has twice cut Europe in two--first by the Iron Curtain and then by the artificial scaffolding of the EU--moving through vibrant cities and abandoned villages, some places still gloomy under the ghost of these imposing borders, some that have sought to erase all memory of it and jump with both feet into the West (if only the West would have them). The farther south he goes, the more he feels he is traveling not along some abandoned Eastern frontier, but right in the middle of things: Mitteleuropa wasn't to be found in Viennese cafés but much farther east, beyond even Budapest and Warsaw. As in Ukraine, these remain places in flux, where the political and cultural values of the East and West have stared each other down for centuries. Rumiz gives a human face not just to what the Cold War left behind but to the ancient ties of empire and ethnicity that are still at the root of modern politics in flash-point areas such as this. 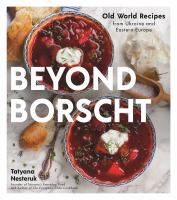 Beyond borscht : old-world recipes from Eastern Europe by Tatyana Nesteruk
With 385k YouTube subscribers and nearly 200k Facebook fans, Tatyana Nesteruk is one of the most popular food bloggers from Eastern Europe. In this cookbook that her devoted readers have been begging for, she shares the food from her native Ukraine, which includes dishes from Russia and other Eastern European countries. This is the food she loves to cook at home--delicious, hearty and comforting meals like Beef Borscht, Chicken Kiev, Pelmeni (Dumplings) with Creamy Dill Sauce, Chicken Shashliki (Kabobs), Savory Blini (Crepes) with Chicken and Mushrooms, and so much more. And of course she's including her favorite Ukrainian desserts, including Napoleon Torte, Cherry Vareniki (Dumplings), Apple Piroshki (Fried Pastries) and Waffle Rolls with Caramel Filling. This cookbook will quickly become a beloved treasure for anyone who has ever lived in or visited Ukraine, Russia, Poland, Hungary and the other countries that make up Eastern Europe. Balancing nostalgic taste with the ingredients available in her California kitchen, Tatyana improves traditional dishes by brightening the flavors, streamlining the methods and curating the recipes to be appealing for today's busy cook with a sophisticated palate. For those from Eastern Europe, adventurous foodies curious about this part of the world and anyone who loves comfort food, you won't want to pass this one by.

Red famine : Stalin's war on Ukraine by Anne Applebaum
In 1929 Stalin launched his policy of agricultural collectivization--in effect a second Russian revolution--which forced millions of peasants off their land and onto collective farms. The result was a catastrophic famine, the most lethal in European history. At least five million people died between 1931 and 1933 in the USSR. But instead of sending relief the Soviet state made use of the catastrophe to rid itself of a political problem. In Red Famine, Anne Applebaum argues that more than three million of those dead were Ukrainians who perished not because they were accidental victims of a bad policy but because the state deliberately set out to kill them.