May 22nd is World Goth Day. Whether you're a member of the Germanic people who sacked Rome in 410 AD, or an enjoyer of dark aesthetics and dreary post-punk music, this list is for you. Lace up those 20-hole boots, dye that hair, and grab a book!

Oh My Goth by Gena Showalter

When fiercely independent Jade Leigh, who assumes a goth appearance, gets into trouble again, her principal decides to teach her a lesson and puts her into an alternate universe where the whole world has gone goth and Jade is now popular.

The Complete Emily the Strange by Rob Reger

Emily is not your ordinary thirteen-year-old girl--she's got a razor-sharp wit as dark as her jet-black hair, a posse of moody black cats, and famous friends in very odd places! The Complete Emily the Strange: All Things Strange collects all three volumes of Emily the Strange in a brand new paperback! It's a perfect time to be strange.

Disintegration by The Cure

Go beyond "Friday I'm In Love" and check out this acclaimed album by dark boys The Cure. Or better yet, listen to their whole discography and have a debate among your friends over which album is the most goth!

The Visigothic Kingdom in Iberia by Santiago Castellanos

A thematic study of how the Visigoth kingdom rooted its structures in what had been Roman Hispania, examining the time period from the late fifth to mid-seventh centuries CE.

A supernatural horror story about a group of unpopular high-school girls who dabble in witchcraft. Once unleashed, the power becomes too much for them to handle, leading to a battle for control between Sarah, the new girl in the group, and power-crazed Nancy.

Interview with the Vampire by Anne Rice

In the first novel in Rice's "The Vampire Chronicles" series, a vampire recounts his tragic two-century life, marked by an endless thirst for human blood.

Kaleidoscope by Siouxsie & the Banshees

"Formed in 1976 within the inner circle of early Sex Pistols fans, Siouxsie Sioux and her band of arcane noisemakers started out crafting spiky post-punk. Before long, though, The Banshees had morphed into a daring, murky-yet-shimmering entity that incorporated elements of goth and psychedelia while transcending both." 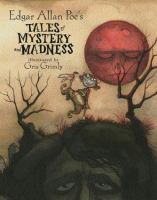 You are about to enter a world where you will be shocked, terrified, and, though you'll be too scared to admit it at first, secretly thrilled. Here are four tales--The Black Cat, The Masque of the Red Death, Hop-Frog, and The Fall of the House of Usher--by the master of the macabre, Edgar Allan Poe. The original tales have been ever so slightly dismembered--but, of course, Poe understood dismemberment very well. And he would shriek in ghoulish delight at Gris Grimly's gruesomely delectable illustrations that adorn every page. So prepare yourself. And keep the lights on.

Synth-pop, darkwave, alternative--whatever you call them, Depeche Mode are masters of the art form, and Violator is a standout album in the genre. Don't tell me you've only heard "Just Can't Get Enough"--so not goth!

Alaric the Goth : An Outsider's History of the Fall of Rome by Douglas Boin

Stigmatized and relegated to the margins of Roman society, the Goths were violent "barbarians" who destroyed "civilization," at least in the conventional story of Rome's collapse. But a slight shift of perspective brings their history, and ours, shockingly alive.