"A meeting of motorcycle enthusiasts of Springfield and its immediate vicinity has been called for next Monday night, for the purpose of effecting an organization of motorcycle riders. The meeting will be held in Rhodes garage on South Jefferson Street and will be open to riders of all makes of machines.

"The primary purpose of the organization will be to promote a closer relation between two-wheel motor enthusiasts in Greene County. The club will have as one of its activities the promoting of a number of 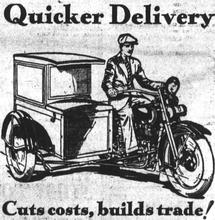 trips to nearby towns on holidays and Sundays. Officers will be elected and a constitution and by-laws adopted.

"There are approximately 250 motorcycle riders in Greene County, it has been estimated, representing a total investment in motorcycles of more than $50,000. A touring club was organized two years ago and numerous trips to towns within a radius of 75 miles of Springfield were made by members. Last fall, however, the club disbanded and the meeting Monday night will be an effort to revive the organization."

The images are newspaper advertisements for Harley-Davidson from the 1920's by the Rhodes Cycle Company.