"At the behest of Rep. Bella Abzug (D-NY), in 1971, and passed in 1973,  the U.S. Congress designated August 26 as “Women’s Equality Day.” The date was selected to commemorate the 1920 certification of the 19th Amendment to the Constitution, granting women the right to vote. This was the culmination of a massive, peaceful civil rights movement by women that had its formal beginnings in 1848 at the world’s first women’s rights convention, in Seneca Falls, New York. The observance of Women’s Equality Day not only commemorates the passage of the 19th Amendment, but also calls attention to women’s continuing efforts toward full equality." For more information visit the National Women's History Alliance.

The Women's Suffrage Movement by Sally Roesch Wagner (editor)
Comprised of historical texts spanning two centuries with commentary on each period by the editor, this book covers the major issues and figures involved in the women's suffrage movement with a special focus on diversity, incorporating race, class, and gender. The writings of such figures as Elizabeth Cady Stanton and Susan B. Anthony are featured alongside accounts of Native American women and African American suffragists such as Sarah Mapps Douglas and Harriet Purvis.

Suffrage: Women's Long Battle for the Vote by Ellen Carol DuBois
Honoring the 100th anniversary of the 19th amendment to the Constitution, this exciting history explores the full scope of the movement to win the vote for women through portraits of its bold leaders and devoted activists.

Public Faces, Secret Lives : A Queer History of the Women's Suffrage Movement by Wendy L Rouse
Over one hundred years ago, women organized to fight for a federal suffrage amendment. But many suffragists were fighting for much more than the vote. The suffrage movement included individuals who represented a wide range of genders and sexualities. It also included a variety of queer relationships. But, suffrage leaders concerned with presenting a respectable public image concealed the queerness of the suffrage movement. This resulted in greater policing of suffragist behavior as suffrage leaders, many of them queer themselves, publicly conformed to gendered views of acceptable appearance and behavior. The problematic effect was to erase the queer history of the movement. Instead suffrage leaders reinforced a patriarchal, heteronormative, cisgender standard of ideal femininity in order to make suffragists and women's suffrage more palatable to the public. The legacy of queer suffragists, however, could not be so easily erased. This book explores how queer women led the suffrage movement while challenging heteronormative concepts of domesticity, family, space, and death in both subtly subversive and radically transformative ways. This book also highlights the alliances that queer suffragists built and the innovative strategies they developed to protect and preserve their most intimate relationships - relationships that were ultimately crucial to the success of the suffrage movement. 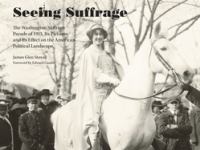 Seeing Suffrage : The Washington Suffrage Parade of 1913, Its Pictures, and Its Effect on the American Political Landscape by James Glen Stovall
On March 3, 1913, the day before Woodrow Wilson's inauguration, leaders of the American suffrage movement organized an enormous march through the capital that served as an important salvo on the long road to the passage of the Nineteenth Amendment. Coinciding with the widespread rise of photography in daily newspapers and significant shifts in journalism, the parade energized a movement that had been in the doldrums for nearly two decades. In Seeing Suffrage, James G. Stovall combines a detailed account of the parade with more than 130 photographs to provide a stunning visual chronicle of one of the most pivotal moments in the struggle for women's rights.

All Stirred Up : Suffrage Cookbooks, Food, and the Battle for Women's Right to Vote by Laura (Food writer) Kumin
A look at how suffragettes brought their political messages into American homes through cookbooks that appealed to women in nonthreatening and accessible ways and ran counter to the militant and stern caricatures often associated with the movement.

Gilded Suffragists : The New York Socialites Who Fought for Women's Right to Vote by Johanna Neuman
In the early twentieth century over two hundred of New York's most glamorous socialites joined the suffrage movement. These women were the media darlings of their day, and they leveraged their social celebrity for political power, turning women's right to vote into a fashionable cause.

Women's March : A Novel of the 1913 Woman Suffrage Procession by Jennifer Chiaverini
Inspired by actual events, this novel offers a fascinating account of a crucial but little-remembered moment in American history that follows three courageous women who bravely risked their lives and liberty in the fight to win the vote.

Once and Future Witches by Alix E Harrow
In the late 1800s, three sisters use witchcraft to change the course of history in a Hugo award-winning author's novel of magic amid the suffragette movement.

Something Worth Doing : A Novel of an Early Suffragist by Jane Kirkpatrick
In 1853, Abigail Scott was a 19-year-old school teacher in Oregon Territory when she married Ben Duniway. Marriage meant giving up on teaching, but Abigail always believed she was meant to be more than a good wife and mother. When financial mistakes and an injury force Ben to stop working, Abigail becomes the primary breadwinner for her growing family. What she sees as a working woman appalls her, and she devotes her life to fighting for the rights of women, including their right to vote. Following Abigail as she bears six children, runs a millinery and a private school, helps on the farm, writes novels, gives speeches, and eventually runs a newspaper supporting women's suffrage, Something Worth Doing explores issues that will resonate strongly with modern women: the pull between career and family, finding one's place in the public sphere, and dealing with frustrations and prejudices women encounter when they compete in male-dominated spaces. Based on a true story of a pioneer for women's rights from award-winning author Jane Kirkpatrick will inspire you to believe that some things are worth doing - even when the cost is great.

American Follies by Norman Lock
In the seventh standalone title in the American Novels series, Ellen Finch recalls her time as an assistant to Elizabeth Cady Stanton and Susan B. Anthony, heroes of America's woman suffrage movement, and her friendship with the diminutive Margaret, one of P.T. Barnum's eccentrics in his circus. When Ellen's infant son is abducted by the Klan to punish her for serving the cause of women, Ellen, Margaret, and the two formidable, if elderly, suffragists must travel aboard Barnum's train from New York to Memphis to rescue the child from death at the fiery cross. American Follies is a savage yet farcical adventure story exploring the roots of America's women's rights movement as well as the depths of our nation's violent and shameful history of prejudice.