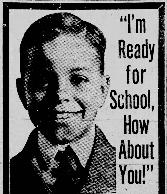 It was estimated that 12,000 students would attend Springfield public schools in 1932.

About 30 Springfield school buildings were to be cleaned and conditioned for the opening day of school, September 6, when approximately 12,000 pupils would enter elementary and high school.

The number of teachers in the school system had been reduced to 342 from 360 the previous year.

Nearly every school in the system had some remodeling done over the summer. Several new schools had been fully supplied with equipment, fixtures and books. School cafeterias had several changes and improvements including additions of new cooking equipment and tables. The popularity of the school cafeterias in the previous year was the greatest in the history of the schools.

A general growth in the public schools was shown by statistics kept by the secretary A.R. Stewart as follows:

About 2,500 of the 12,000 students expected to attend school in 1932, would attend Pipkin, Jarrett and Reed Junior High Schools. Pipkin and Jarrett were expected to have the most enrollments with 800 to 1,000 students enrolling in each school. This information comes from an article in the Springfield Press, August 28, 1932.

The image above is from an advertisement for the Springfield Laundry Company in the same newspaper issue.