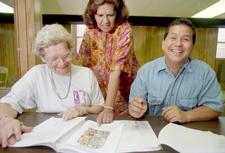 Longtime Monett resident Norma Wahburn, left, tutors Juan Landeros in English at the local Methodist church in Monett while Alma Villagrana, who works as a Methodist missionary, oversees the lesson. This photograph appeared in a News-Leader article about the immigration of Hispanic people to Monett and surrounding areas in a search for jobs at the poultry processing plants in the vicinity.

"This has become a popular place to find work and get a good education for their kids," said Jerry Edwards, director of the West Missouri Migrant Education Center. Monett's public schools showed only a few Hispanic enrollments in the 1992-93 school year. In 1994-95 there were fifty enrolled. The school had 150 enrolled for the 1996-97 year.

It was thought that most of the immigrants were from rural areas in northern Mexico where jobs were scarce and the pay could be as little as three dollars a day, whereas the poultry processing plants, Tyson and George, paid six dollars an hour.

The article does note some of the problems, such as culture clash, language barriers, and some fears that the rising Hispanic population could lead to an increase in crime. To try to alleviate some of the difficulties, the police department reported that there were no more Mexicans committing crime than anyone else, the Migrant Education Center and several area churches offered Spanish and English classes, and a speaker at local clubs helped to educate people in the Mexican-American way of life.

In the photograph below, Anita Salas plays on the sidewalk while her brother Carlos, father Jose, and sister Aresely