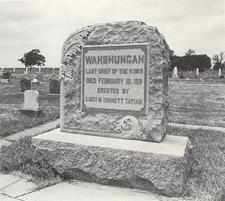 "Wahshungah, the famed last chief of the Kaws, one of the proud tribes which at one time roamed over the plains of the great middle west, will have his many deeds of valor perpetrated in a handsome monument to be erected by a Springfield firm.

"Known as a chief of prowess in the days of the past, Wahshungah, who only died February 18, 1911, will, through the solicitation of Almond R. Miller, who is superintendent and special distributing agent of the Indians at the Kaw Training School, and Lucy and Emmett Taglah of the tribe, be honored by the United States government, which has consented to erect a large monument to the memory of Wahshungah and the tribe over which he held sway. The monument will be quite an elaborate stone, and will cost $500.

"Bids were entertained by the committee on selection from dealers in Guthrie, Oklahoma City, Kansas City, and other places, but W.O. Johnson of 614 Boonville Street landed the contract and will immediately begin preparations for getting the stone ready for shipment.

"The Kaws were a large tribe in the early history of the white man's occupation of this country, but like many other Indian Nations, is dwindling rapidly in numbers and will soon be extinct. The Kaw River, which joins the Missouri River at Kansas City, was named after the tribe and their name is otherwise perpetuated in various localities throughout the middle west."

The monument above is located in the Washunga Cemetery in Kay County, Oklahoma. The image is courtesy of Find a Grave.