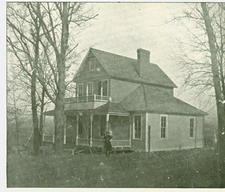 The Springfield-Greene County Library receives frequent questions about "the camp where Girl Scouts were murdered along Lake Springfield" or "along the James River." After a search for a campsite matching that location, staff discovered that Winoka Lodge is the site in question.

Located near Lake Springfield, near the interchange of Highways 60 and 65, Winoka Lodge was owned by the Schweitzer family in the 1920's and used as a summer home. The name "Winoka" means "Great Spirit".

Stories have circulated that Winoka Lodge area is haunted, but this is unsubstantiated. The lodge's remote location along Lake Springfield and numerous unused buildings on the property may have resulted in a mistaken attribution to an incident, which occurred near Locust Grove, Oklahoma. Three girl scouts were murdered at a Girl Scout camp near Locust Grove, Oklahoma, on June 13, 1977, and the campsite closed permanently the following day due to that incident.

A photograph [above] and information about the Lodge can be found in the 1904 Sou'wester, the Drury College Year Book (p.42). Winoka Lodge is also found in the 1904 Plat Book of Greene County, Missouri. As far as can be determined from local directories, the site has never been affiliated with the Girl Scouts of the U.S.A. The property is privately owned today and trespassing is not permitted.

In addition, there are several newspaper articles and an information file in the Local History and Genealogy Department concerning Winoka Lodge.