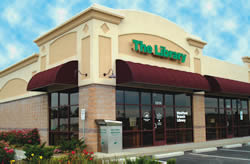 Go green! Copies may be scanned to a USB drive. Bring your own USB drive, or purchase one at the Library Center for $5.

About the Strafford Branch

Within view of Old Route 66, the automobile-themed Strafford Branch Library gives residents of this eastern Greene County community their own facility, and becomes the 10th library in the Springfield-Greene County Library District, and the fifth outside of Springfield.

The Strafford Branch leases space in Chestnut Plaza, an attractive shopping center south of Interstate 44 on State Highway 125. Near Strafford schools, the Library is easily accessible to students.

The Friends of the Library, who, for more than 25 years, have steadfastly raised money through their highly popular annual book sales, donated $26,300 to buy most of the furnishings for the branch. Empire Bank donated $4,000 for two murals that enhance the vintage car décor.