Most materials must be used in the Library Center. Photocopiers and microform printers are available.

Search the catalog for:

The collection includes many histories of local and nearby battles.

Before 1900, surviving newspapers were infrequent.

Ozarks News and Historical Index (ONHI) is an online selected subject index to newspapers and periodicals.

Search the catalog for:

See the Library's guide to beginning your Native American research

Street, highway, physical, political and historical maps. Atlases and gazetteers of historical interest.  Sanborn Fire Insurance Maps for Springfield, the 1933-1950 and 1957 print versions are available at the Library. Plat books for Greene County and some area counties. The 1930 plat books of Missouri are available online. USGS topographical quadrangle maps for most of Southwest Missouri.

A portion of their book collection is housed at the Library Center, and the rest are located at their library, 534 W Catalpa, Springfield, Mo. The collection covers most states with a focus on Virginia, the Carolinas, Kentucky and Tennessee – states from which most early Missourians migrated during the westward expansion. Their book collection is searchable in our catalog. Under "location" choose Ozarks Genealogical Society.

53 active titles covering different aspects of Missouri and Ozarks history and culture such as Missouri Historical Review, Ozarks Mountaineer, Missouri Life and 417. An archive of magazines no longer published such as Springfield Magazine and 40 other titles. Older issues of White River Valley Historical Quarterly, Bittersweet and Ozarks Watch are available online or in print. Several genealogical magazines including Family Tree Magazine and Genealogical Computing. Some magazine articles have been indexed in our Ozarks News and Historical Index.

Questions about your research? 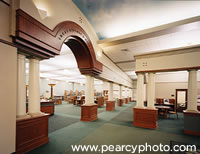 Receive the latest updates to this site via email or RSS feed. Signup is quick and easy, just click the applicable link below.