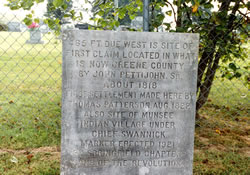 Farm Road 186 is really known as Steinert Road. This road is indeed historic but its significance here is that it is a means of reaching the Patterson's Spring area. Heading south from Springfield on Campbell Avenue (Highway #160 south), Steinert Road is 1.7 miles south of James River Freeway. Go west on FR 186 for 1.6 miles, then left on FR 143 4 miles and Patterson Cemetery will be on the left. The directions are quite easy to follow and the reward is ample. The gently rolling land is a delight to behold. In the spring of the year, the redbuds bloom in profusion, fruit trees are in full blossom, leaves are popping out on nearly all of the many trees and the grass is already a lush green.

But there is something more: just outside the fence, and centered between the two entrance ways, is a large stone monument, which is deeply etched with a message for present and future generations. The text of the marker reads as follows:

"465 ft. DUE WEST IS THE SITE OF THE FIRST CLAIM LOCATED IN WHAT IS NOW GREENE COUNTY BY JOHN PETTIJOHN, SR. ABOUT 1818. FIRST SETTLEMENT HERE BE THOMAS PATTERSON, AUG, 1822. ALSO SITE OF MUNSEE INDIAN VILLAGE UNDER CHIEF SWANNICK. MARKER ERECTED 1921 BY SPRINGFIELD CHAPTER SONS OF THE REVOLUTION."

The marker was originally in the field on the west side of the road (across from the cemetery).

To locate the original site of the claim, one must add 50 feet, due to the new location of the marker. It would seem to be a moot point since the original buildings are gone. However, some of the "old buildings" were still there a half century ago. Fortunately, very good records have been kept of the early days in Greene County. Upon examination of the land and the cemetery, one's conclusions can be enriched by the abundance of the written history of the region.

John Pettijohn, Sr. was born in Henrico County, Virginia, fought in the Revolutionary War, and married in Virginia. He moved to Ohio in 1797 and lived there some twenty years until he heard of the excellent hunting and good land on the White River at the mouth of its North Fork. In Ohio, he had been farming in Gallia County; the probable date of his leaving Ohio was 1817.

The elder Pettijohn, with his family and a number of others, traveled down the Ohio River and eventually reached the mouth of the North Fork on the White, in what is now Arkansas. Malnutrition and sickness caused delay and mental depression. Probably worst of all was the loss of Pettijohn's wife and the wife of his son, William.

There is good reason to believe that Pettijohn, Sr. was on the James River, in what is now Greene County, prior to 1820. Some have maintained that he made the Patterson's Spring claim in 1818. This would definitely place the Ohio departure at an earlier date.

In 1822, it is said that John Pettijohn's son, William, had ventured north and had returned to his family and friends at the North Fork, enthused about a land that flowed with milk and honey. Speaking of the land along the James River in the Southwest Missouri Territory, he referred to bear grease and buffalo marrow, considered delicacies in those days. The friends and relatives were interested. Therefore, later in 1822, Pettijohn and others returned to the place, on the north bank of the James River, where he had earlier built a log cabin and filed a claim. In the group was Thomas Patterson and several members of his family. Patterson was a native of North Carolina and had moved to Tennessee and then to the North Fork area, and to a place in history.

That first claim was described as follows: "the northwest quarter of the northeast quarter of section 27, township 28, range 22". This was eight miles south of Springfield in Greene County, this distance being found in a Greene County history written in 1878. Now barely outside the Springfield city limits, this tract faces the possibility of inclusion within the city in a few short years. Already there is a sizable housing development nearby on Steinert Road.

The claim, having been made by the elder Pettijohn in an unknown prior year, was sold with improvements to Thomas Patterson, who was said to have been "...pleased with the claim." Since the Territory of Missouri was not organized by the U.S. Congress until 1818, it is unlikely that the claim had been filed before that time.

The Pattersons began the first settlement there, in Greene County, in 1822. It was good land, with plenty of water, and it had been proven by Indians for untold ages. The hunting was excellent. However, the settlers undoubtedly did not know that the government had made a treaty with the Delaware Indians in 1818 and the Kickapoo in 1819. Under the terms of the treaties, those tribes were given portions of Greene County, including the tract then owned by Thomas Patterson.

Nothing came easy for the band of pioneers. About the autumn of 1822, the Indians began to occupy the south half of the county; the Delawares came in force, numbering about 500. Frequent conflicts began almost at once and the settlers elected Patterson to act as emissary to the authorities in St. Louis to find the truth of the matter. He returned with bad news for the pioneers; the Indians had a legal right to the land. The settlers had to move. In a later treaty, the Delaware and the Kickapoo tribes were moved farther west. Possibly as early as 1828, many of those earliest Greene County settlers returned to their claims as the settlement became permanent.

When the original settler were once again on their land, Thomas Patterson set aside the space for the Patterson Cemetery as a final resting place for himself and his descendants. Among the stones in the cemetery is one for Thomas Patterson (1778-1851) and one for his wife, Jane (1788-1853). The cemetery is, at the time of this writing, a beautiful and quiet resting place for the Patterson descendants, just as it was intended.

Early in this century, the area known as Patterson Spring, the original claim site, was described by a Judge Vaughan as: "the one now used for picnics." It is doubtful that the present farming operations would allow public picnics but the beauty of the area remains.