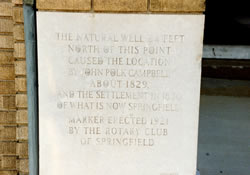 Campbell's settlement was at the site of a large spring on Jordan's Creek known as "The Natural Well." The legal location was NW 1/4, Sec 24, T29N, R21W. The original marker was located in the retaining wall of the Missouri Pacific right-of-way between Boonville and Jefferson Avenues on the south side of Water Street. The retaining wall has been removed. A post-type marker is to be erected at the site of the original one. The text on the marker reads as follows:

This site, selected by John Polk Campbell for his home was acquired from the Kickapoo Indian tribe, whose reservation included the Springfield area until their removal farther west in 1831.

In 1825, John Polk Campbell, his older brother Madison, a cousin named Jerome Rountree and several others went on a prospecting trip to southwest Missouri, intending to establish trading posts with the Indians. A chronicler wrote as follows: "On their outward trip, the two brothers lost their way and when night fell they had no idea where they were; but as they were stumbling on in the darkness, seeking a suitable camping place, they happened on an Indian village where they were received with grave kindness. It soon transpired that one of the young Indians was very ill. An old chief led the two white boys to the tepee where the sick lad lay, and made them understand that they were to cure him. With all the assurance of youth they undertook the task, using the medical supplies and herbs provided by their mother for their trip. The young Indian grew worse. He seemed on the point of death and the boys knew well enough what their fate would be if he died after their treatment. They redoubled their efforts. The red boy grew better and in a few days was quite well again. Great was the fame of the two foreign lads as medicine men. As an act of gratitude, the chieftain bestowed upon my grandfather a tract of land. This gift was later legalized and is now the site of the city of Springfield, Missouri." (From "A Confederate Girlhood -- Memoirs of Louisa Cheairs McKenny Sheppard," a granddaughter of John Polk Campbell.)