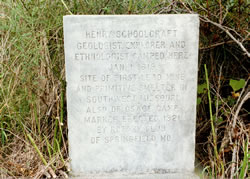 This marker is located just off Greene County Farm Road 193, near Kershner's Spring close to the confluence of the James River and Pearson's Creek. To reach this location proceed east on Sunshine (Hwy D) 2.1 miles from Hwy 65. Turn right on FR 199 and south to FR 193. Go right about .4 miles to a private road across the tracks and then left to the east side of the private house. The marker is down the hill to the east near the old spring house. The text of the marker reads as follows:

A series of unfortunate business ventures (including an embarrassing bankruptcy) and his perception that he could earn money by compiling accounts of the western frontier, led Henry Rowe Schoolcraft to migrate from upstate New York and seek a fresh start in the West. His knowledge of mineralogy, gained through experience in glass manufacturing, and a strong interest in geology induced him to explore the mines of the Ozarks in 1818-1819. His goal was to obtain sufficient knowledge of the area to secure a federal appointment as superintendent of the mines.

During September and October of 1818, Schoolcraft and his equally young and inexperienced companion, Levi Pettibone, stayed in the home of Moses Austin in Potosi, During that time, Schoolcraft carried out a detailed study of the lead mines in the eastern Ozarks.

Setting out from Potosi on November 5, 1818, the two adventurers traveled southwest across the Ozarks to the mouth of the White River. At that point, they acquired some guidance from James Fisher and William Holt, two frontiersmen who lived on Beaver Creek at its entry into the White River. Schoolcraft and Pettibone thereby made their way up the James River to the site of the lead deposit exposed in the riverbank near the mouth of Pearson's Creek. Schoolcraft wrote in his journal that he and Pettibone camped there (also near Kershner's Spring) from January 1 to 5, 1819. They returned to Potosi on February 4, 1819.

Near the lead vein cited above, Schoolcraft found a primitive smelter where, for many years, trappers and the native Osage people had smelted the lead for bullets. The vein of lead ore described by Schoolcraft proved to be one of many veins of galena distributed through the parent limestone rock. The ore was mined briefly in 1844 by miners working for Joseph W. McClurg of Linn Creek. Mining began again in 1875 when the property was owned by Colonel John S. Phelps. McClurg served as governor of Missouri from 1869 to 1871, Phelps from 1877 to 1881. Mining ceased at the Phelps diggings in 1891, but many new mines were opening nearby. During the 1890's, the Bowyer and Company and the Lewis Mining Companies dug shafts and worked extensive underground runs in other mines in the Pearson's Creek Mining District. Mine tailings, mill foundations and other remains of the old mining works may still be seen scattered in the timber and among the houses east of Springfield.

While at the mine, Schoolcraft explored the surrounding area. His description of the Kickapoo Prairie captured the magnificent grandeur of the virgin prairie landscape that once occupied the upland where the city of Springfield now sprawls. He wrote: "The prairies, which commence at the distance of a mile west of this river (the James), are the most extensive, rich and beautiful of any which I have ever seen west of the Mississippi River. They are covered by a coarse wild grass which attains so great a height that it completely hides a man on horseback riding through it."

The upland prairies, like the river bottoms, were later plowed and planted to corn and small grains. Today, dairy and feeder cattle graze on fescue and other domestic grasses that now cover the uplands.

When placed within a lifetime of activities and accomplishments such as explorer, recorder of Native American folklore and author of 31 large literary works, Henry Schoolcraft's three-month-long Ozarks expedition was a small episode, almost a youthful adventure. However, the notes that he recorded and later organized and published as a journal preserved one of the few contemporary records of the natural setting and the manner of frontier settlement and activities during their earliest stage of development.

Henry R. Schoolcraft, Journal of a Tour into the Interior of Missouri and Arkansas in 1818 and 1819. London: Sir Richard Phillips and Co., 1821.