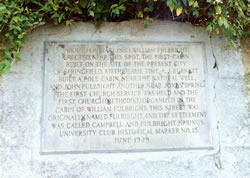 The marker for the first cabin erected in what is now Springfield is set in the retaining wall on the south side of College Street in the 1200 block. The legal location of the cabin was NE 1/4, NW 1/4, SEC 23, T29, R22W, Springfield Quadrant. The text on the marker reads as follows:

"ABOUT FEBRUARY, 1830, WILLIAM FULBRIGHT ERECTED, NEAR THIS SPOT, THE FIRST CABIN BUILT ON THE SITE OF THE PRESENT CITY OF SPRINGFIELD. AT THE SAME TIME, A. J. BURNETT BUILT A POLE CABIN NEAR THE NATURAL WELL. AND JOHN FULBRIGHT ANOTHER NEAR JONES' SPRING. THE FIRST CHURCH SERVICE WAS HELD AND THE FIRST CHURCH (METHODIST) ORGANIZED IN THE CABIN OF WILLIAM FULBRIGHT. THIS STREET WAS ORIGINALLY NAMED FULBRIGHT, AND THE SETTLEMENT WAS CALLED CAMPBELL AND FULBRIGHT SPRINGS. UNVERSITY CLUB HISTORICAL MARKER NO. 15 JUNE 1929"

William Fulbright may have passed through the Ozarks as long as nine or ten years before returning to what was to become Springfield, although some accounts report he got location information from John Polk Campbell while both men were still living in Tennessee. In either event, in 1829-1830 he brought family and possessions, built the log cabin and remained until he died in 1843.

The Greene County Assessor's listings for 1833 report his holdings as 16 slaves, 6 horses, 14 cattle, one watch worth $5, mules and jacks (one worth $40). Fulbright, obviously a prosperous farmer, and his wife, Ruth Hollingsworth Fulbright, had 13 children, 12 sons and one daughter. Fulbright and his wife (who lived until 1874) were buried at the foot of the hill below their cabin. In the early 1900's, following the nearby development of railroad tracks and shops, descendants had the family members removed to Hazelwood Cemetery, where several Fulbright burial markers may still be seen.

(The above information was taken from material compiled by Ralph and Lena Wills.)