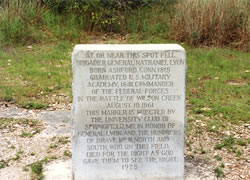 A monument to General Nathaniel Lyon and the Battle of Wilson's Creek is situated on top of "Bloody Ridge" at or near the spot where General Lyon was struck down. This is now in Wilson's Creek National Battlefield Park. The text on the monument reads as follows:

"AT OR NEAR THIS SPOT FELL BRIGADIER GENERAL NATHANIEL LYON. BORN ASHFORD, CONN. 1818. GRADUATED U.S. MILITARY ACADEMY, 1841. COMMANDER OF THE FEDERAL FORCES IN THE BATTLE OF WILSON CREEK AUGUST 10, 1861. THIS MARKER IS ERECTED BY THE UNIVERSITY CLUB OF SPRINGFIELD, MO. IN HONOR OF GENERAL LYON AND THE HUNDREDS OF BRAVE MEN, NORTH AND SOUTH, WHO, ON THIS FIELD DIED FOR THE RIGHT AS GOD GAVE THEM TO SEE THE RIGHT. 1928."

Before Nathaniel Lyon ever came to southwest Missouri, conflict between Northern and Southern forces in the state had become ever more imminent. Governor Jackson and his armed militia were pro-slavery. The Federal troops, mainly pro-Union German immigrants, were led by a fiery young regular, Captain Nathaniel Lyon. Fearing an attack on the Union arsenal at St. Louis, Lyon raided the governor's militia camp. He disarmed the men and marched them through the streets of the city. A hostile crowd jeered, shoved and threw bricks. At last someone opened fire and the troops returned it. Before the shooting was over, twenty eight men lay dead or dying. The governor and his legislature at once took measures but the Federal commander, General W. A. Harney, arranged a temporary truce. Then Lyon replaced Harney and was promoted to the one-star rank of brigadier general. He refused to abide by the truce and drove the governor out of the capitol. He then marched his little army into Springfield in July of 1861, organized Union troops and sympathizers into a larger army and tried to rid the region of all armed Confederates. However, at a place called Wilson's Creek, he got into a sharp fight against a larger force; a Rebel bullet knocked Nathaniel Lyon dead from his horse.

The Confederates kept their hold on southwest Missouri, and there was fighting in the area throughout the war. Missouri did not leave the Union, and that was all that the federal government cared about at the time.