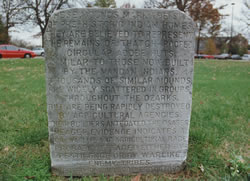 This marker was placed on the campus of Drury College by the University Club of Springfield in 1927; the location is near the tennis courts west of Drury Lane. The text of the marker reads as follows:

"THESE MOUNDS MARK THE SITE OF PRE-HISTORIC INDIAN HOMES. THEY ARE BELIEVED TO REPRESENT THE REMAINS OF THATCH-ROOFED CIRCULAR ADOBE HUTS, SIMILAR TO THOSE BUILT BY THE MANDAN INDIANS. THOUSANDS OF SIMILAR MOUNDS ARE WIDELY SCATTERED IN GROUPS THROUGHOUT THE OZARKS, BUT ARE BEING RAPIDLY DESTROYED BY AGRICULTURAL AGENICES. THEIR BUILDERS ANTEDATED THE OSAGES. MEAGER EVIDENCE INDICATE A NON-WARLIKE AND AGRICULTURAL RACE. PROBABLY EFFACED EITHER BY PESTILENCE OR BY WARLIKE ENEMY TRIBES."

A Springfield News-Leader article of June 26, 1976 suggests some doubt as to the authenticity of the mounds, the news item reading as follows:

"A recent archaeological investigation revealed that at least one of the 'Indian mounds' on the Drury College campus is a natural formation and is not manmade, field directors of the Ozark Archaeological Survey report. At the request of Dr. Robert E. Cooley, chairman of the Historical Sites Record of Springfield, OAS conducted excavations on the mound just east of the tennis courts on the campus recently.

"Purpose of the test was to validate the archaeological and historical significance of the mound prior to its destruction to make way for construction of additional tennis courts," said Jeep Helm and Betty Jane Turner, field directors of OAS.

"The research was part of the preliminary study to designate Drury College as a historical district on the National Register of Historic Places, according to the directors.

"Historical marker No. 13, placed on the campus in 1927 by the University Club reads 'These mounds mark the site of Prehistoric Indian homes'.

"No material could be found in the testing which would confirm the text of the marker, the archaeologist reported. The inscription also states that the old St. Louis road once ran diagonally through the campus. Findings of the archaeologist show this statement to be in error, but old Springfield maps show the road to Jefferson City cutting through the campus, the investigation found.

"Full report of the findings were written by Mrs. Helm and Mrs. Turner, who are survey and research associates at the Center for Archaeological Research of Missouri State University.

"Copies have been donated to Greene County Library, Drury College and the SMSU Library. Dr. Cooley, director of the Center at SMS, is consultant to the project."