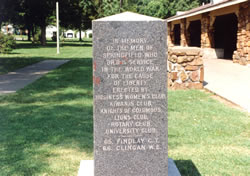 Grant Beach Park is located in north Springfield, bordered by Douglas Avenue on the east and between Calhoun and Hovey Streets. In its northwest portion, there proudly stands a handsome brown granite monument. Guarded by large trees and kept company by the 1930's pavilion, the monument gives silent testimony to the valor of the Springfield casualties of World War I. On the south side of the monument is a marker with text reading as follows:

"IN MEMORY OF THE MEN OF SPRINGFIELD WHO DIED IN SERVICE IN THE WORLD WAR IN THE CAUSE OF LIBERTY. ERECTED BY BUSINESS WOMEN'S CLUB, KIWANIS CLUB, KNIGHTS OF COLUMBUS, LIONS CLUB, ROTARY CLUB, AND UNIVERSITY CLUB."

The effort to prepare the monument had been spearheaded by Dr. E. M. Shepard, Professor of Geology at Drury College, and 1924 president of the University Club. On November 12, 1924 -- the 6th anniversary of the signing of the armistice of the Great War -- more than one thousand men, women and children gathered in the park to celebrate the event and dedicate the monument. Included were veterans of the Civil War, the Spanish American War and the recent World War.

At 11:00 a.m., the ceremonies began at the stone obelisk. Captain John Crockett, chaplain of the American Legion Post, gave the opening prayer. Major J. L. Heckenlively explained the significance of the occasion. During the playing of the national anthem, the monument was unveiled by Captain Harry D. Durst, Spanish American War veteran and later mayor of Springfield. He spoke of the spirit of brotherly love which should come out of the war experience. He deplored ethnic and racial prejudices and stressed the importance of tolerance. Finally, taps was sounded and the ceremony ended under the direction of Captain Lewis Eslick of the National Guard.

The following names are inscribed on the monument: