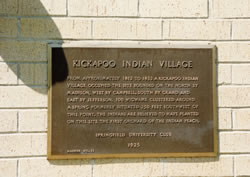 This marker is mounted on the south wall of an apartment building which is located on the east side of South Street in the 800 block, just north of Madison Street. The text of the marker reads as follows:

FROM APPROXIMATELY 1812 TO 1832 A KICKAPOO INDIAN VILLAGE OCCUPIED THE SITE BOUNDED ON THE NORTH BY MADISON, WEST BY CAMPBELL, SOUTH BY GRAND AND EAST BY JEFFERSON. 100 WIGWAMS CLUSTERED AROUND A SPRING FORMERLY SITUATED 250 FEET SOUTHWEST OF THIS POINT. THE INDIANS ARE BELIEVED TO HAVE PLANTED ON THIS SITE THE FIRST ORCHARD OF THE INDIAN PEACH.

The "approximately 1812" is puzzling. It was not until 1819 that the American government, by the treaties of Edwardsville and Fort Harrison, induced most of the Illinois and Indiana Kickapoo to move to a tract in Missouri south of the Osage River. Of course, by 1812 the American settlers in Illinois and Indiana would have been happy to be rid of the frequent Kickapoo raids, which featured scalping, horse theft and burning. Also, the Kickapoo regularly went on hunting expeditions in Missouri and Arkansas. Finally, the Spanish Louisiana authorities had already established a "western band" of Kickapoo on the Missouri River near St. Louis as early as 1765. The date 1832 (see marker text) is the year the American government moved the Kickapoo out of Missouri.

There is a tradition that Springfield founder John Polk Campbell, by amateur doctoring, cured a young Kickapoo of a "bilious fever." It is said that, in gratitude, one or more Kickapoo guided Campbell to a natural well, where the Kickapoo chief gave him use of the land. Later this became the city of Springfield. Usually the Kickapoo were very hostile toward the American frontier settlements. Any deviation from collective tribal ownership was considered a grievous sin against the Great Spirit, and it was not until the removal of the Kickapoo that the government surveyors came into the area.

The term "wigwams" for the Kickapoo dwellings is misleading. These dwellings were not the tepees (or "tipis") of the plains Indians but were oblong lodges made of bent-over saplings and roofs of bark or cattail-reed mats. The Kickapoo called these homes "wickiups."

The spring mentioned in the marker text has disappeared, probably driven underground by tons and tons of dirt-and-rubble fill. The area of the spring now features a cluster of apartment houses.

Our Kickapoo villagers seem to have belonged to one of the more peaceable factions of this doughty Algonquin tribe, first met by Europeans in what is now southern Wisconsin. These superb marksmen and horsemen, on their own or as mercenaries for the Spaniards or Mexicans, raided and fought whites and other Indians from Illinois and Indiana to the Gulf of Mexico coastal area, to Texas and Mexico.