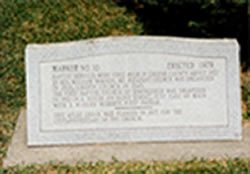 This marker is gone and no one knows where it is. The exact spot where it stood for many years is known, but yields no clues. The location of the brick house in which the church was organized is also known, but the house is no longer there. The former location of the marker is on a city parking lot or just nearby in a relocated street. Time has been kinder to our heritage, in that we have considerable information regarding the purpose of the marker. The text of the marker reads as follows:

It would be only a statistical exercise if background and historical perspective were not provided in respect to the establishment of this church. Although there are now more than sixty churches in the Greene County Baptist Association, there is still a community impact when a new church is begun. However, it is nothing like the effect of the establishment of a Baptist Church where and when there was none. There were already churches of other denominations in Springfield in 1852, but the coming of the bold, evangelical Baptists did not go without notice. Springfield was a pioneer town on the Missouri frontier and everything that happened was the concern of all.

Southwest Missouri was truly on the frontier and the Baptist movement arrived there much later than in the East. Travel was difficult and prospective church members were few. These factors did not stop the spread of the Baptist churches; it only slowed them down a bit. Be that as it may, the first organization of Missouri Baptists was formed in 1816, three years before Missouri attained statehood.

Downtown Springfield had been the site of Kickapoo and Osage Indian villages from 1812 to 1828. The first permanent settlements in Greene County were mostly along the James River (See MARKER NUMBER ONE first settlement in Greene County). At that time, in 1827 and 1828, pioneer preacher William Mooney conducted church services in the homes of the settlers up and down the James River.

In 1852 Springfield was a thriving village with five stores, more than one blacksmith shop, a bank, a courthouse, a schoolhouse and the ever-present saloon. At that time there were two churches holding regular services, the Presbyterian and the Methodist. In the immediate vicinity were two Baptist churches. One was Mount Pleasant Baptist, near Willard, organized in 1838; the other was Liberty Baptist, near Fair Grove, founded in 1845. They are still in existence.

These two churches, along with several others in Greene and nearby counties, cooperated in the Liberty Baptist Association. At the 1850 annual meeting, there were 112 churches making up the Liberty Association. There was little financial assistance available to help new churches, but there was ample prayer support and other encouragement from fellow Baptists.

At the time of this organization, Braxton McCord Roberts was the presiding elder of the Methodist Church for the district (which included Springfield). He joined the Liberty Baptist Church in 1850 and was immediately ordained into the Baptist ministry. There must have been some previous discussion of the matter. Springfield was growing and there was an obvious need for Baptist work there. Liberty Church wanted to have a part in it and they had found the man suitable for the work.

In 1851, the members of the Liberty Church voted that "...any member of the church who wishes to join the branch at Springfield, if constituted, is at liberty to do so." In the following year the congregation voted to "...grant that an arm of the church may be organized at Springfield in answer to a petition of some of the brethren of that place."

On the second Saturday of July 1852, Rev. McCord Roberts, with eleven others, organized the First Baptist Church of Springfield, Missouri. The place of meeting was in a small brick house on Olive Street, roughly north of where the old Number 1 fire station was formerly situated. That brick house was said to be on the brow of a hill overlooking the location of the former Frisco depot.

Joining Roberts in this effort were Benjamin F. Price, Nathaniel Robinson, Aaron Beckner, P. H. Edwards, John Young, William Phillips, Finella B. Caynor, Frances A. Allen, and B. W. and Lucinda Henslee. They made up in determination what they lacked in numbers and financial assets. They met next at a schoolhouse just east of Benton Avenue, just to the rear of the home of Pastor Roberts, then in Temperance Hall on the public square. Later on, the fledgling congregation met at the Methodist church. In 1860 they met in the residence of Rev. Roberts. In 1861, their new church building was completed and they thought that their somewhat nomadic existence was ended, only to have Federal troops occupy the building in June, 1861. Then, following the battle of Wilson's Creek, it served as a hospital. When it was no longer needed for that purpose, it was used for a time as a storehouse. It then served again as a Union hospital and later as a refuge for Union soldiers. It even functioned as housing for General Sanborn's bodyguard and as a place for dramatic presentations which were staged to raise money for the Union refugees.

When, in 1866, the reorganization of the church was begun, the house of God was in great disarray. Only 18 members were marshalled to attempt reorganization, and restoration of the facility. The church building itself was in very bad condition. In 1895, a fine new church building was completed on the west side of South Street; this is the present location. Today it consists of a fine auditorium, excellent educational space and a rather remarkable Family Life Center. A marker with a somewhat different text than the original is now located on the South lawn of the First Baptist Church on South Street.