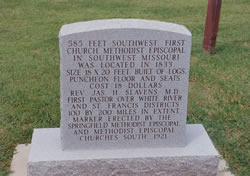 The first church in what was to become Greene County was built near a spring called Richardson's or Fairbank's Spring, about one mile northeast of the public square. The marker is placed on the west side of North National Avenue where Calhoun Street angles into Silver Springs Park. The text of the marker reads as follows:

A Methodist conference was held at McKendree Chapel in Cape Girardeau County on September 15, 1831. A young circuit rider, James Harvey Slavens, was appointed to serve what had been designated the James Fork of the White River Mission. Joseph Rountree, later to be Springfield's first teacher, was approaching the village with his family by covered wagon when they were encountered by Slavens. The young preacher was riding to the area, where he planned to preach to the settlers and organize a Methodist church. The Rountrees invited Slavens to join them for dinner. He apparently made a very good impression, since he later married one of Rountree's sisters.

On October 10, 1831, Slavens preached the first sermon ever delivered in Springfield, at the home of William Fulbright on West Walnut Street. Three weeks later, he organized a class of religious instruction; at the end of the year, he had 47 persons in his congregation.

In 1832, Springfield's first house of worship was built by William Fulbright; it was a simple log structure, with rough hewn log floor and seats, and reputedly at a good price!

A curious development: in 1834 Slavens "studied medicine" (brief book learning about medicinal plants and curative drugs), and he practiced the art in Greene and adjoining counties thereafter. Our sources vary widely on the extent of Slavens' missionary domain. One account mentions the "settlements in that part of the state," another says it "was most of Southwest Missouri," still another (see marker text) states that the territory was 200 miles east to west and 100 miles north to south. In any event, after doing some medical practice, Slavens apparently restricted himself to local preaching and acting as secretary to the local Methodist conference. Incidentally, we may sadly note here that the split in the Methodist denomination, over the slavery issue in 1844, was not healed until 1939; St. Paul's was Southern while Grace was Northern.