FIRST CLASSICAL ACADEMY IN THE SOUTHWEST 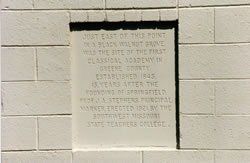 The Stephens Academy, the first classical academy in Greene County, was established by Professor J. A. Stephens in 1845. This followed the founding of Springfield by 14 years and its first school by 13 years. The marker is located on the west side of the northwest corner of the TraveLodge Motel at 505 St. Louis Street. The text reads as follows:

"JUST EAST OF THIS POINT IN A BLACK WALNUT GROVE WAS THE SITE OF THE FIRST CLASSICAL ACADEMY IN GREENE COUNTY. ESTABLISHED IN 1845, 15 YEARS AFTER THE FOUNDING OF SPRINGFIELD. PROF. J. A. STEPHENS PRINCIPAL. MARKER ERECTED, 1921 BY THE SOUTHWEST MISSOURI STATE TEACHERS COLLEGE."

Following is a lengthy advertisement by Professor Stephens in the Springfield Advertiser on August 9, 1845:

"The subscriber respectfully solicits the patronage of patients and guardians at his school in this place. Having studied the course of education at Cumberland College, Kentucky, and having been engaged in teaching, both the higher and lower branches of education for five years, he feels sure he will have the approbation of all candid judges. It has been, and will be, his greatest endeavor to conduct his school on the principles of strict morality. Students will be critically prepared for the regular classes in college, or they may pursue the course of study with him.

"In the lower department, after the present session, the prices will be $7.50 per session of five months and in the higher $12.50.

"The subscriber would further say that so soon as it is necessary he will rent or purchase a suitable house for the purpose of lodging those students who may be committed of using the hours of the night and morning to a very great advantage. In this way they will have the advantage of instruction at all times and use of a literary library. The subscriber mentions this because he is anxious to establish himself permanently here, and wishes to have a fair opportunity of trying his skill. J. A. Stephens"

Miss Lucy Dow of Walden, Vermont was hired by Professor Stephens to teach at his school. She was the first female school teacher in Springfield. Until around 1850 all instruction was by men. Lucy Dow was first wife of Charles Sheppard. Later, Marie Burden also taught music at the Stephens Academy.

There is no certain account of how Stephens Academy fared. At least it existed until Christmas Day, 1861, when its principal met a tragic death. The city was being threatened by Confederate troops; and zealous, tense Federal soldiers cried, "Halt!" at John Andrew Stephens as he walked from downtown to his home in the 300 block of Mount Vernon Street. He had been warned of danger in doing so but said that he must go to his wife and daughters. Hard of hearing, he did not hear the command and he was shot and killed by soldiers whose cause he had supported.