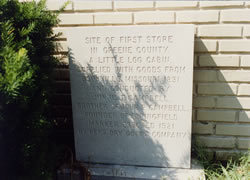 The first store in southwest Missouri was located near what is now the southwest corner of the Landmark Office Building on the north side of Olive Street between Jefferson and Robberson Avenues. The legal location of the store was NW 1/4, NW 1/4, SEC 24, T29N, R22W, Springfield Quadrant. The text of the marker reads as follows:

Junius T. Campbell was born in Maury County, Tennessee on June 224, 1812; he moved to what is now Springfield in 1831. In the fall of that year, he opened his small store and continued in the mercantile business for eight years. Business competition developed in 1832 when Major D.D. Berry opened a second store after arriving from Tennessee with two wagon loads of goods.

In 1832, Junius Campbell married Mary R. Blackwell in one of the first two wedding ceremonies held in the new community. Also in 1832 he was elected Justice of the Peace, the first of a series of public offices he was to hold. The first case he tried made him aware of the difficulties and perplexities of his new position; just two hours after the conclusion of this trial, the 20-year-old Justice resigned his office. He did return briefly to law enforcement in 1855 to fill an unexpired term as County Sheriff. Between those two positions, he served as County Treasurer and then was Postmaster from 1836 to 1841. (Some early historians assert that Junius Campbell was the first postmaster, not his brother John Polk Campbell.) During the time that Junius was postmaster, mail came twice a week from Boonville, Missouri and Fayetteville, Arkansas.

In 1876, a national centennial celebration was held in Springfield; growing out of this fete was the formation of an Old Settlers' Association with Junius T. Campbell as president. Mr. Campbell died on February 15, 1878.