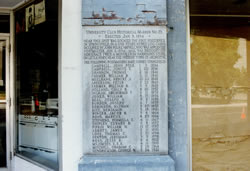 In Springfield, Missouri, on the west side of the Jefferson Avenue, some 100 feet north of Walnut Street, a marker has been erected to commemorate the establishment of the city's first Federal Post Office. The text of the marker reads as follows:

NEAR THIS SPOT WAS LOCATED THE FIRST POST OFFICE IN SPRINGFIELD, IN A ONE ROOM, HEWN LOG CABIN, OCCUPIED BY JOHN POLK CAMPBELL WHO WAS APPOINTED ON JANUARY 3, 1834. MAIL WAS BROUGHT ON HORSEBACK TWICE A MONTH FROM HARRION'S STORE ON THE PINEY NEAR THE PRESENT TOWN OF ARLINGTON".

THE FOLLOWING POSTMASTERS HAVE SERVED SPRINGFIELD.

This would seem to be an accurate record, requiring no further comment, but such is not the case. John Polk Campbell, according to all creditable evidence, was not the first postmaster. There is, however, the possibility that he served as postmaster until one could be appointed and confirmed. The evidence indicates that John's brother, Junius T. Campbell, was actually the first postmaster and that the information on the marker is in error. In any event, the remaining data on the marker are accurate, and many of the listed names are those of Springfield's most illustrious citizens.

With regard to Junius Campbell, it seems that many "first" in the history of Springfield must be credited to this pioneer rather than to his brother, John Polk Campbell. In the History of Greene County, published by Perkins and Horne in 1883, there is a significant statement, as follows:

"Junius T. Campbell arrived in Springfield in the month of October, 1831. He was the first justice of the peace elected by the people and was chosen to that office in 1832. He was also the first postmaster at Springfield. Before the establishment of the office the nearest post office was at Little Piney, now in Crawford County, one hundred and ten miles distant from Springfield. In those days the rates of postage differed from those now in vogue. Prior to the act of 1845 the postage upon a letter composed of a single sheet was as follows: If conveyed 30 miles or less, 6 cents; between 30 and 80 miles, 10 cents; between 80 and 150 miles, 12 1/2 cents; between 150 and 400 miles, 18 3/4 cents; over 400 miles, 25 cents. By the act of 1845 the postage on a letter conveyed for any distance was fixed at 5 cents, and for any greater distance at 10 cents. By the act of 1851, it was provided that a single letter if prepaid should be carried any distance not exceeding 3,000 miles for 3 cents, and any greater distance for 6 cents".

M. J. Hubble's Personal Reminiscences and Fragments of the Early History of Springfield and Greene County contains a collection of accounts of early life in and around Springfield. In his testimony, the Honorable L. H. Murray mentions John P. Campbell as one of the leading early settlers, but not as postmaster. After naming a number of prominent citizens of early Springfield, Junius T. Campbell was cited as the first postmaster. A more recent publication was edited by Kenneth M. Shuck; it is a Springfield history intended for a young audience, but it contains information presented in a lucid manner. In one place it states: "Two of John P. Campbell's brothers, Junius T. and William, were among the early settlers. Junius arrived in October 1831. He was the first Justice of the Peace, elected in 1832. He was also the first storekeeper and postmaster. The post office was placed here in the latter part of 1834".

Thus the Campbell men (another member was Ezekiel Madison Campbell) were noteworthy in the early days of Springfield and Greene County, and indeed of Bolivar and Polk County as well; however, it does seem quite clear that Junius T. was the first postmaster of our tiny village.