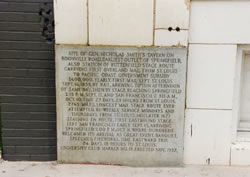 This marker commemorates the Butterfield Overland Stage. The Springfield station was at the General Smith's Tavern on the east side of Boonville Avenue, one-half block north of the Public Square. The tavern became the Nathan clothing store, which burned down in 1913 and was replaced by the Barth clothing store and, more recently, by various other businesses. The marker is on the northwest corner of the wall of that building. The text of the marker reads as follows:

The Butterfield Stage was an important part of the early history of Springfield. The creator of the stage line was John Butterfield. Born in Bern, New York in 1801, Butterfield advanced from a stage coach driver to the head of his company in New York state. He was one of the founders of the American Express Company and the Wells Fargo Company. He got the bid for the overland mail contract via the passage of the Overland California Mail bill of 1857, supported by Springfield's own John S. Phelps, later a Union general and governor of Missouri. The contract was for Butterfield to establish semi-weekly mail and passenger service from the Mississippi River to San Francisco for six years, the trip to be made in 25 days.

The St. Louis to San Francisco route began by train to Tipton, Missouri, south of Boonville. It then followed the Old Wire (telegraph) Road via Warrensburg and Bolivar to Springfield, leaving the town along Fassnight Creek, on to Cassville, Ft. Smith, San Antonio, El Paso, Yuma, San Diego, Los Angeles, and San Francisco. At Springfield the 3,000 lb. Concord Coach was replaced by a "Celerity Wagon," an open-sided vehicle better suited to the heat of the southwest. Mules replaced horses for part of the journey, giving the line the name "Jackass Mail."

The fare was $200 one way or ten cents a mile for a portion of the trip. Six to nine passengers were inside the coach, and an unlimited number crowded on top (presumably at a reduced rate). A letter could be sent all the way for a dime! (Compared with the Pony Express, St. Joseph to San Francisco, which cost $5.00 for a letter -- but in only ten days.) The average speed was 15 miles per hour and a 120 rough miles a day.

The first west bound stage was driven by John Butterfield, Jr. with his father one of the passengers. The elder Butterfield, T. R. Corbin, and Judge Wheeler with his wife and two children left Springfield on the coach after a 45-minute stay. W. L. Ormsby, a reporter for the New York Herald, was also aboard and his account of the journey is in the Huntington Library in California. Of his stop in Springfield, he wrote: "It is a flourishing town of about 2,000 inhabitants and has been for 25 years the seat of the General Land Office. It has several churches, a branch of the State Bank of Missouri, and if somebody there had enterprise enough to build a lot of houses, it would be a rapidly growing town. The passage through it of the Overland Mail...has much increased its importance." Ormsby recorded in his dispatches back to the Herald that the roads between Springfield and Ft. Smith were the worst along the first run; then Ormsby decided to take a ship "around the Horn" rather than to return to St. Louis on the stage coach.

Nicholas Smith, a general in the state militia, built his hotel at the stage stop in Springfield on the east side of Boonville Avenue as it entered the public square from the north. He was one of the town's earliest and most prominent citizens, its largest slave holder, the receiver of the U. S. Land Office, and "Commissioner of Swamp Lands in Missouri" (a long way from Swamp-East, Missouri!). He was rich -- left an estate of over $100,000 when he died in 1858 at age 55. Mrs. Smith had the first piano in the area; she played it for the Delaware Indians, no doubt to their awe and amazement. (Her family must have been well off, since the piano was a gift when she graduated at sixteen from a ladies' seminary in North Carolina. The piano was brought here by wagon.)

It is not recorded whether liquor (called "groceries" in the early days) was sold in the hotel; if so, the establishment was a considerable cut above the ordinary saloons, called "doggeries" or "dram shops." An active nationwide temperance movement, dating from the 1840's, managed to close these facilities intermittently; in 1849 a temperance building rose at the northeast corner of the Square. Court action would open the saloons and the groceries flowed again. The last time Greene County voted dry was in 1910. The Smith Hotel was one of 200 stage stops (four of these in Mexican Territory) at the zenith of the Butterfield Overland Mail. It was probably one of the plushest; at some others, accommodations and meals were sparse indeed. The Civil War made the southern route untenable, and after 19 months existence the U. S. mail left from St. Joseph, and the Jackass Mail died.