All Library branches will be closed and the Mobile Library will not make its scheduled stops on Monday, May 30. 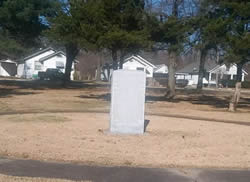 This marker is in reference to a cavalry attack carried out in Springfield during the Civil War. The marker is in the north end of Zagonyi Park at 630 S. Park Ave., near the intersection of West Mt Vernon Street, the site of "Zagonyi's charge." The text of the marker reads as follows:

"THIS MARKER COMMEMORATES ONE OF THE MOST DARING AND BRILLIANT CAVALRY CHARGES OF THE CIVIL WAR. LATE AT NIGHT, OCT. 24, 1861, MAJ. CHARLES ZAGONYI, COMMANDER OF FREMONT'S BODY GUARD, WITH 300 MEN, INCLUDING 130 OF MAJ. WHITE'S PRAIRIE SCOUTS, LEFT FREMONT'S CAMP NEAR BOLIVAR TO ATTACK A CONFEDERATE FORCE AT SPRINGFIELD. ON THE 25TH THEY DETOURED ABOUT A MILE WEST OF THE PRESENT FRISCO STATION TO EFFECT A SURPRISE FROM THE WEST. THE CONFEDERATES, PROBABLY 1500, ENCAMPED ON THE HILL AND IN THIS VALLEY, WERE WARNED AND READY: BUT ZAGONYI, DIVIDING HIS FORCES, REPEATEDLY CHARGED UNTIL THE ENEMY RETREATED TO THE EAST AND SOUTH. ZAGONYI REORGANIZED THE REMNANT OF HIS FORCE ON THE PUBLIC SQUARE AND PROVIDED CARE FOR THE WOUNDED BEFORE LEAVING TO REJOIN FREMONT'S COMMAND. ON THIS STREAM, 12 M. S.W. WAS FOUGHT THE BATTLE OF WILSON CREEK, WHERE GEN. LYON WAS KILLED. UNIVERSITY CLUB HISTORICAL MARKER NO. 17. ERECTED MAY 6, 1931."

As a result of the defeat of Union forces at the Battle of Wilson's Creek, the death of General Nathaniel Lyon, and the September, 1861 losses at the Battle of Lexington, General John Fremont (to save his reputation) set forth for southwest Missouri in order to run the rebels out of Missouri for once and for all.

Major Charles Zagonyi, in command of Fremont's body guard, with 300 troops, attacked the Confederates in Springfield in advance of Fremont's main forces. Major Zagonyi soon returned to Fremont's encampment near Bolivar. Three days later, on October 29, Fremont reached Springfield, marching about 30 miles in 12 hours. On November 2, General Fremont was relieved of his command by order of General Winfield Scott.

Several members of the University Club were dissatisfied with the text of the marker, claiming that it contained inaccuracies, as follows: The Confederate camp in west Springfield had only about 1000 "men", many of whom were just boys in their early teens. The majority of these soldiers-in-training were armed only with old farm shotguns and muzzle-loading rifles. Also, Zagonyi did not divide his forces. They became divided because of the battle and the rough, unfamiliar terrain. Zagonyi's men rode the "finest bay horses they could steal in Kentucky." Each man was armed with a brace of revolvers and with a new type of Colt six-shooter which was said to be effective at ranges up to a mile.

General John C. Fremont was in charge of Union forces in Missouri and, at the time of this incident, was stationed in Bolivar.

Major Charles Zagonyi was a Hungarian soldier of fortune who headed General Fremont's personal guard. He apparently served in various conflicts in Europe before he came to America and "sold his sword" to the Union forces.

Fremont had moved into southwest Missouri in October, 1861 and established a camp on the Pomme de Terre River about fifty miles north of Springfield. Most of southwest Missouri was in southern hands and the Confederate flag flew over the Springfield Public Square. However, there were some Unionists in the area and some of these made their way into Fremont's camp and told him of the disorganized and poorly-armed condition of the Southern forces in the Springfield area. Fremont decided that an attack on those forces was in order and selected his own personal guard, under Major Zagonyi, to carry out the mission. The 300 men (three companies) of the guard, plus about 100 members of Major Frank White's "Prairie Scouts" left the Fremont camp on the evening of October 24, 1861. Next day, the guard personnel angled to the west as they approached Springfield so as to attack the Confederates from the west. Major White's men missed a turn at a fork in the road and White himself was captured by Confederates, taken down into Christian County and imprisoned overnight in the home of D. A. Dryden. However, Dryden was a Union sympathizer; he sent his 13-year-old son out to enlist help from other Unionists and several did come and rescued Major White.

Zagonyi and his forces attacked the Confederates west of Springfield. The Southerners with their shotguns and muzzle-loaders did some damage but for the most part the guard prevailed. Each of Zagonyi's men could fire eighteen consecutive shot with his rifle and two revolvers while the rebels had to reload after each shot.

The Zagonyi guard personnel galloped on into Springfield, pulled down the Confederate flag at the Square, gave encouragement to the Unionists present and then headed back to Fremont's camp. Zagonyi claimed, falsely, that he personally raised the Union flag over the courthouse. This was actually done next morning by a Dr. Melcher who had borrowed a flag from Mrs. Sophia Worrell. Two days later, the courthouse was burned down by an arsonist but the flag was saved.

Zagonyi reported the attack to Fremont, embellishing the events, as the following account will show:

General: I respectfully report that yesterday at 4 P.M., I met at Springfield about 2000 rebels, formed in line of battle. They gave me a warm reception, but your guard, with some feeling, made a charge, and, in less than three minutes, the enemy was completely routed. We cleared the city of every rebel and retired, it being near night and not feeling able to keep the place with so small a force. Major White's command did not participate in the charges. I have seen charges, but such brilliant bravery I have never seen, and did not expect. Their war cry, "Fremont and the Union", broke forth like thunder.

One might wonder who wrote this report for Zagonyi. He was Hungarian, as previously noted, and illiterate in English although reputedly well-lettered in his own language.